Conferment ceremony of the Order of the Rising Sun, Gold Rays with Rosette to Father Gaëtan Labadie (September 8, 2021) 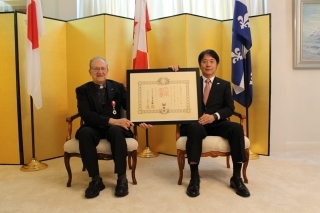 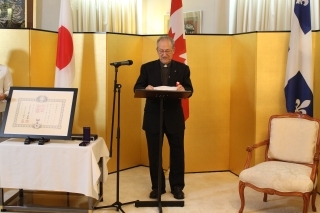 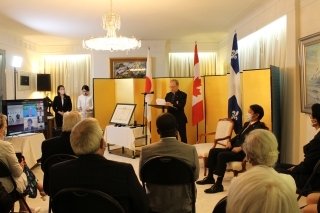 On September 8, the Order of the Rising Sun was conferred upon Father Gaëtan Labadie, C.S.V., Quebec resident, during a ceremony. Following the publication last fall of the recipients’ list, Father Labadie, Former Principal and President of Saint-Viator Rakusei Junior and Senior High School for many long years, was awarded the Order of the Rising Sun, Gold Rays with Rosette, as a foreign national having contributed to the promotion and the development of private-school education in Japan. This ceremony in his honor also welcomed online guests Mr. Masashi Adachi, Special Advisor to the Prime Minister of Japan and former student of the Saint-Viator Rakusei School, Mr. Masaichirou Yoshioka, President of the School’s Alumni Association, and Mr. Takaya Anami, Principal of the School. The Consulate General of Japan in Montreal bears witness to Father Labadie’s work with respect and congratulations.