Conferment ceremony of the Order of the Rising Sun, Gold and Silver Rays to Ms. Masako Takahatake (August 1, 2021) 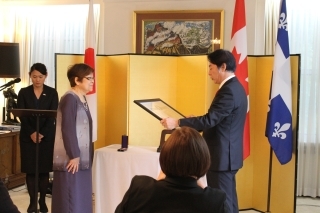 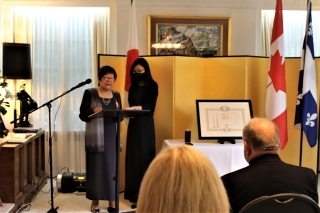 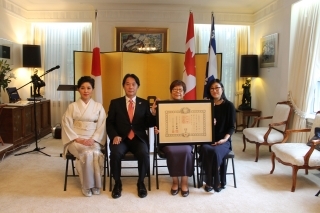 On August 1, Consul General Izawa held at his official residence the ceremony of conferment for the Order of the Rising Sun, Gold and Silver Rays, to Ms. Masako Takahatake. During the three decades of the Heisei Era, from 1989 to 2018, Ms. Takahatake largely contributed to several Japanese-Canadian exchanges and to the strengthening of the friendship linking Japan and Canada, through the numerous activities of the Canada-Japan Society of Montreal. In addition, Ms. Takahatake contributed to the creation of the Montreal Japanese Language Center in 1976, and dedicated many years to the establishment as principal and teacher, playing an important part in the dissemination of Japanese language learning in the greater Montreal region. The Consulate General of Japan in Montreal bears witness to the achievements of Ms. Takahatake with its sincere congratulations.