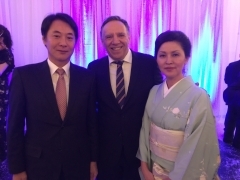 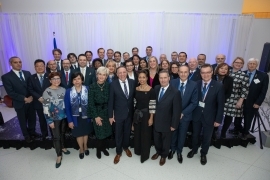 On January 28, Consul General Izawa attended Day 1 of the 33rd "Journées annuelles d'information des chefs de poste consulaire" organized by the Government of Quebec, which included a report on the Quebec government's efforts hitherto, as well as its action plan for foreign policy going forward. After the meeting, Consul General and Mrs. Izawa attended a reception hosted by Quebec Premier François Legault and his spouse, and Minister of International Relations and La Francophonie Nadine Girault, in honor of the heads of consular missions of the province, during which they discussed Japan-Quebec relations with their hosts and with Tourism Minister Caroline Proulx.