Official Visit of Ambassador Ishikane and Consul General Izawa to Newfoundland and Labrador (September 25 to 27, 2019) 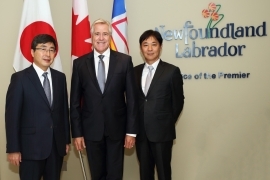 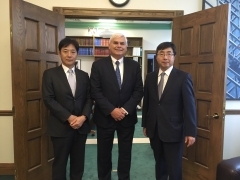 The Honourable Scott Reid, Acting Speaker of the House of Assembly

During their official visit to Newfoundland and Labrador from September 25 to 27, Ambassador Ishikane and Consul General Izawa made courtesy calls to the Honorable Dwight Ball, Premier of NL, the Honourable Scott Reid, Acting Speaker of the House of Assembly, Ms. Sarah Stoodley, Parliamentary Secretary to the Minister of Tourism, Culture, Industry and Innovation, Ms. Lori Anne Companion, Fisheries and Land Resources Deputy Minister, His Worship Danny Breen, Mayor of St. John's , in addition to visiting Memorial University of Newfoundland (MUN) and its Marine Institute, and PAL Aerospace and PAL Airlines headquarters to discuss the development of Japan-Canada relations with their representatives. Carrying on with the discussion, they also met with Senator David Wells and his spouse, as well as with members of the local Japanese community and JET Alumni Association Quebec/Atlantic (JETAA Q/A).