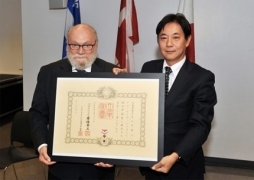 On October 3, UQAM Honorary Professor Claude Yves Charron was awarded the Order of the Rising Sun, Gold Rays with Neck Ribbon. The award was presented by Consul General Izawa. UQAM Rector Magda Fusaro and other university colleagues were present, as were representatives of the Government of Quebec, to celebrate Dr. Charron’s contribution to promoting academic exchange and mutual understanding between Japan and Canada.

After the official ceremony were held a presentation on exchange programs between UQAM and Japanese universities, a tea ceremony demonstration, and a traditional Japanese dance performance by Komachi Montreal, in the context of UQAM’s 50th anniversary.